In recent years, non-alcoholic (NA) beer, wine and zero-proof spirits have been on the rise. But none have matched 2022 — a monumental year for the emerging category. One of the biggest winners is NA beer. Sales in the U.S. non-alcoholic beer market were estimated to account for 23.6 percent of the total [non-alcoholic] market share in 2022 according to a survey by Future Market Insights (FMI). Globally, the NA beer market is expected to surpass a valuation of $43.6B by 2032, expanding at a 7.8 percent CAGR. From July 2021 - July 2022, there were 72 new non-alcoholic products introduced to the U.S. market, of which nearly half were non-alcoholic beers.

What’s driving all this growth? It’s not just teetotalers, adopters of sobriety and the sober curious. More than 80 percent of non-alcoholic drink buyers also purchase drinks that contain alcohol. And as Gen Z ages into the beverage alcohol market, their preference for no- and low-ABV beverages influence that number as well. Subsequently, consumers in their early 20s drink 20 percent less per capita than millennials did at the same age and 64 percent of Gen Zers expect to drink alcohol less frequently as they age versus Millennials and Gen Xers.

While the majority of the NA beer market is led by major suppliers like AB InBev and Heineken, one brand, in particular, has managed to stand out and eat away at their Goliath-like dominance.

Founded in 2017, Athletic Brewing Co. has seen storied, almost fairytale-like growth since its inception. How it all started is storied as well.

The Ultramarathon That Sparked a Big Idea

The seed for Athletic Brewing Co. was planted back in 2013 when Bill Shufelt stopped drinking alcohol while training for an ultramarathon. A successful trader at Point72 Asset Management at the time, becoming an entrepreneur or living an alcohol-free lifestyle was never something he considered — especially between the weekly client dinners and weekends spent with friends over a few drinks. But eventually, Shufelt decided it was time to leave alcohol behind.

“Bill likes to say that eliminating alcohol from his life was the “biggest life hack” he’s ever uncovered,“ says Chris Furnari, Communications Manager at Athletic Brewing Co. “He realized that alcohol was no longer serving his lifestyle and saw how much of an artificial ceiling it was on achieving all of his goals.”

As a former lover of craft beer, however, Shufelt was disappointed with the non-alcoholic options that were available then.

He recognized just how little innovation had occurred in the non-alcoholic beer space and became obsessed with the idea of creating a delicious craft beer sans alcohol. After countless hours researching the industry and combing through volumes of brewing techniques and methodology, Shufelt began to put together the framework for the original Athletic Brewing Co. business plan. He quit his career in asset management (with some coaxing from his wife) and pivoted to pursue his newly found obsession, teaming up with award-winning brewer, John Walker, to launch the brand.

Today, Athletic Brewing is a top-20 craft beer producer in the United States. They’ve produced over 100 million cans of beer in under five years and operate bi-coastal, large-scale custom breweries in San Diego, California, and Milford, Connecticut. In 2022, they were ranked as the 26th fastest-growing private company in America by Inc. Magazine and named one of TIME’s “100 Most Influential Companies.”

Reimagining How Non-Alcoholic Beer is Made

Despite its success, building a craft brewery that focused solely on producing NA beverages wouldn’t come without its challenges, most of which came down to how to brew it in the first place. 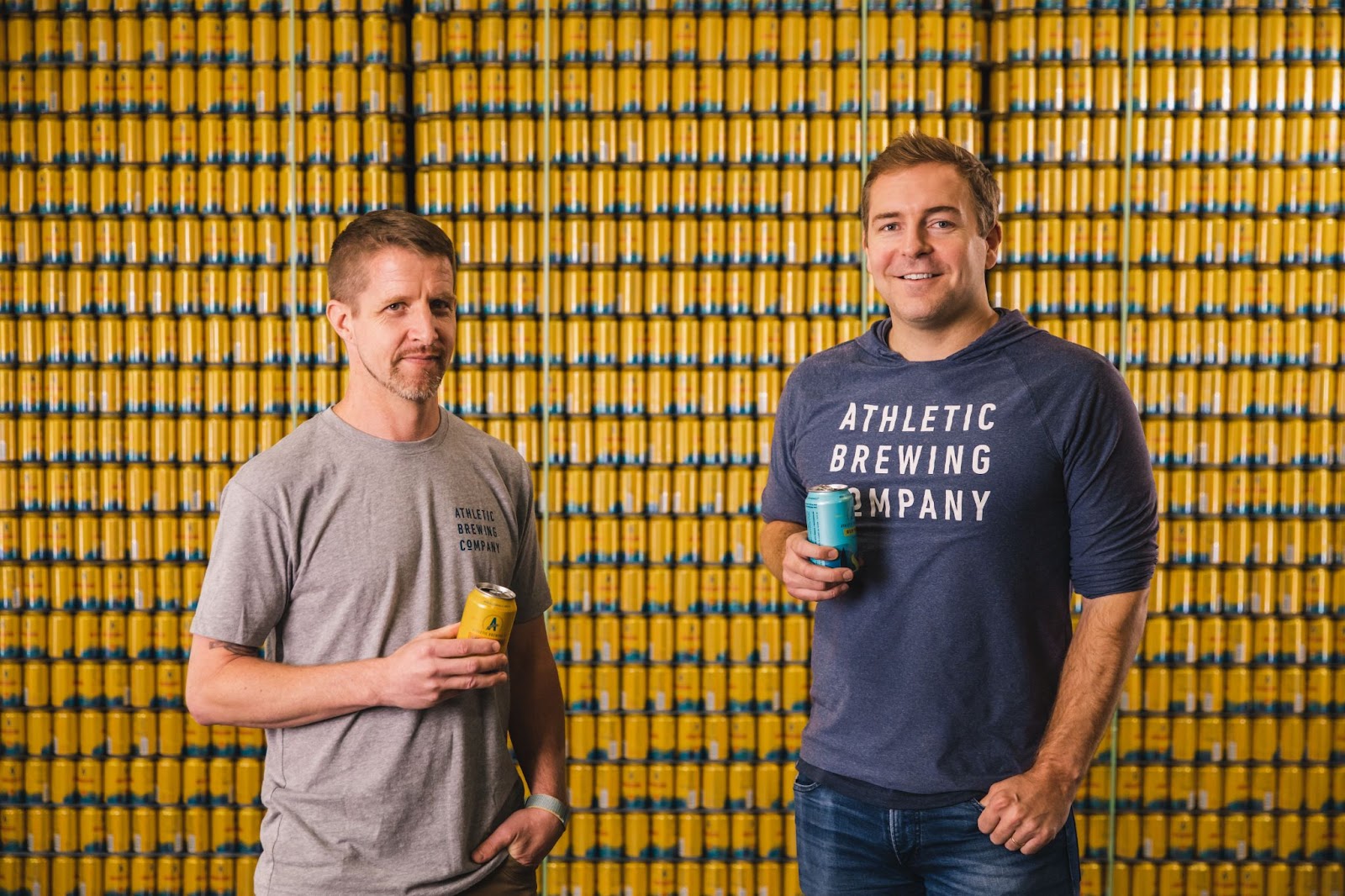 Starting with upwards of 100 five-gallon trial batches, Walker and Shufelt would split the batch into multiple carboys and treat each one differently, making tweaks like a one-degree temperature change. They’d take notes and move to the next batch. Eventually, the pair settled on a method that involves roughly a dozen changes to the traditional brewing process, resulting in a great-tasting NA craft beer that avoids the disadvantages of the dealcoholization process, like quality control and high energy costs.

“As a result of those early trial batches, we were able to scale up our proprietary method of brewing to a commercial level without having to rely on any alcohol removal techniques or technologies,” explained Furnari.

The copious notes and countless hours of R&D would pay off in order to fully ferment their beer to under 0.5% ABV — the legal limit for non-alcoholic beer in the U.S.

But it’s not just the brewery’s proprietary brewing methods that contribute to its award-winning quality. Significant investments in food safety and quality control processes (each can is tunnel pasteurized) have allowed them to deliver a shelf-stable product that’s both delicious and food safe.

The brewery is well aware that its product isn’t for everyone. But that doesn’t stop them from trying.

“We’re definitely not a soapbox company,” says Furnari. “We know that 80 percent of our customers still drink alcohol.” With more and more consumers choosing to consume consciously, there’s growing space for Athletic Brewing to fill.

“Many choose to drink [our beer] during the week and on weekends as a way to moderate their consumption,” says Furnari. “We know that roughly 50 percent of Americans don’t drink much at all, and 70 percent of Americans consume fewer than two drinks per week. Our goal is to be an option for all of those consumers who love and appreciate the flavors of craft beer but don’t always want the alcohol.”

What better way to achieve that goal than kicking off the new year right? 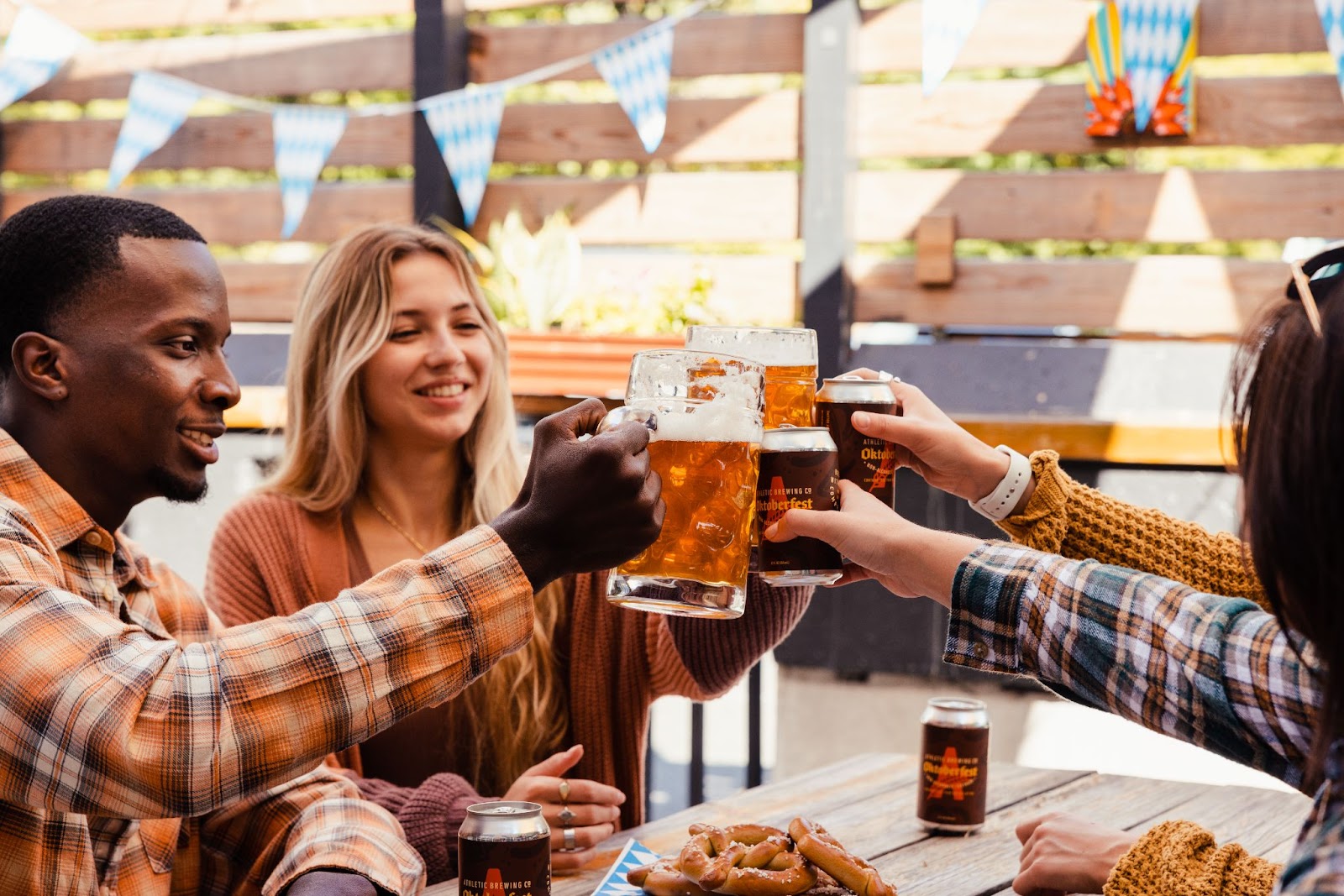 Known as Dry January, many consumers choose to abstain from drinking alcohol, resulting in a large opportunity for NA beverage brands. While the rest of the industry will ramp up marketing efforts to stave off a drop in consumer demand after the holidays, non-alcoholic brands like Athletic Brewing are in a position to appeal best to consumers who abstain in addition to those who don’t.

“This year we’re encouraging everyone to “Give Dry a Try,” says Furnari. “For those customers who might be on the fence about trying a non-alcoholic beer, the idea of giving up alcohol for 31 days can be somewhat intimidating. We’re motivating people to try our beer when they might otherwise have had a full-strength offering.”

In addition to their “Give Dry a Try” campaign, their eyes are set on continued growth and expansion in the new year. “Our primary focus in 2023 is getting our beer to more people in more places,” says Furnari. According to him, “non-alcoholic beer represents around one percent of all beer sales in the U.S., compared to some European countries where non-alcoholic beer is anywhere from five percent to 15 percent of the total beer market.”

A Year Rife with Potential

The brewery is poised to make a big splash across on- and off-premise businesses and consumer households in 2023. Recent Provi Pulse insights show that bar, restaurant and retail buyers are purchasing NA beverages at a growing rate. In 2022, Athletic Brewing’s Lite Non-Alcoholic was one of the fastest-growing products in percentage increase in the number of buyers, orders per buyer, and dollars spent per order in the Provi marketplace — just behind Guinness Draught 0.0.

That growth is the culmination of being at the forefront of a rising cultural movement as well as the brewery’s years-long effort to produce award-winning, great-tasting non-alcoholic beer for anyone and everyone.

“We know that roughly half of Americans consume less than one alcoholic drink per week,” says Furnari, “which means there’s a tremendous opportunity to introduce Athletic [Brewing] to a huge population base that generally avoids alcohol altogether.”

Learn more about Athletic Brewing Co. by visiting their website, athleticbrewing.com, or discover their line of non-alcoholic beers in the Provi marketplace here.