Mead is a drink that’s often associated with Norse mythology, Vikings, and medieval life. Don’t worry, it’s a very real beverage despite being a drink of the gods, and it’s one that is gaining a fair following in the modern world of bars and restaurants.

So, what's the deal with mead and where can you fit it into your menu today? We’re going to provide a rundown of the basic history of the drink and show some reasons why it’s being considered a must-have autumnal beverage.

A Brief History of Mead

Let’s start by answering a basic question, what is mead? Well, that depends on who you ask. Some purists insist there is a difference between the honey wines that most people accept as mead and the sort that is made with honey, water, and beer yeast.

For our purposes, mead is a honey wine, and it’s brewed through a fermentation process involving honey and water. It is made to be consumed like a beer or wine. That sounds very simple at first glance, but mead is a versatile drink that can vary in significant ways.

For example, mead can be flavored by using hops, fruit, various spices, and grains. Thus, you can see a wide range of flavors with mead, and those differences are important because it has led to many craft brewers and a larger drinking audience.

Another notable difference that can occur with mead is alcohol content. Some mead has an ABV measure as low as 3.5% while some others come closer to the 20% mark. This drink can vary in terms of sweetness and carbonation levels, too.

Mead is a fascinating drink because it has been around for thousands of years and in many places such as Ancient China, Ireland, Norway, and others. It may even be the world’s oldest alcoholic beverage.

However, mead never attained the same popularity as other forms of alcohol such as beer, rum, and fruit-based wines despite being easy to make. For many years, the consumption of mead was on the decline. Fortunately, the meticulous records of mead-makers allowed for a relatively easy recovery process when people became interested.

Furthermore, there has been an uptick in the number of people taking up the challenge to make mead throughout the world. It’s gaining popularity once again, and it’s not all that unusual to find a craft meadery these days.

Making mead is a relatively simple process that was discovered thousands of years ago. It is most similar to a white wine fermentation process, and it takes place in two steps.

First, there is a primary fermentation that lasts between 28 and 56 days. From there, a second fermentation process begins. That phase can last upwards of 9 months depending on the brew and desired outcomes for the mead. There are several different variations of this process available and a wide variety of mixtures that are being developed today. 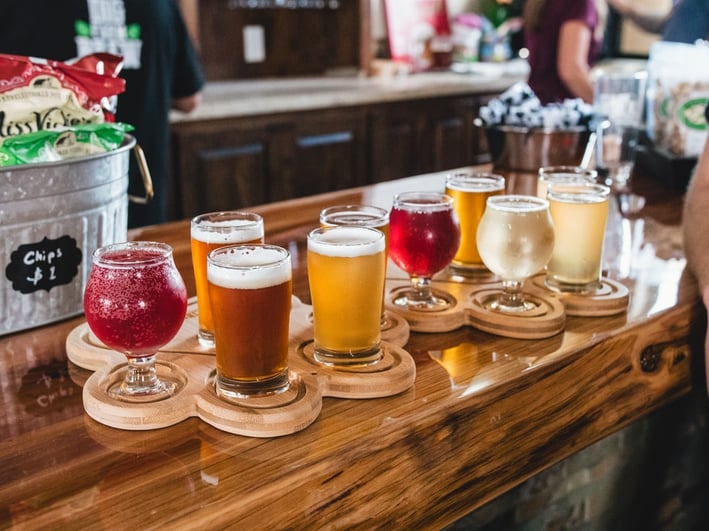 You may have seen mead offered on the menu at your favorite bar, or you may consider putting it on the menu at your own establishment. Now, you probably have a wide variety of different wines available, if you serve them, but mead is a little different in terms of alcohol content and branding.

Several contributing factors have led to the re-emergence of mead on menus. One of them is the drink’s appeal fans of shows like Game of Thrones and Vikings. The other factors are the ease with which mead is made and the emergence of excess honey from beekeepers doing their part to reinvigorate the bee population.

This confluence of events has led to widespread availability and acceptance of mead as a drink of choice. Now, more and more bars are working to source mead from local breweries and seeking small batches of the drink to entice their customers.

However, the question must be asked, where should mead be included on the overall menu? Is it merely a seasonal drink? As we’ve said before, this is a versatile drink, and you can find a variation to work with whatever other items you have on your menu.

A Fall Classic in the Making

While mead is a drink that you can have all year round, it’s becoming more accepted as a fall beverage. One reason that you’ll want to include it on your menu in the colder months is that it comes in a variety of flavors that invoke the season. Apples, honey, various spices, and figs are a few of the most common mead flavors that people enjoy, and they’re very common in the fall.

Another reason that this alcoholic beverage is becoming more autumn-oriented is the variety of food pairings. Much like other wines, you can find meads that are perfect as a couple with desserts as well as rich foods. That’s one of the reasons you will see mead served at a renaissance fair- it goes well with turkey legs and potatoes.

It's very easy for any bar or restaurant to include this option, too. Mead can be heavily spiced, sweet, fruity, or have a strong-honey flavor. While they do go well with dinner, they go equally well with lunch and dessert. So, with fall and winter coming, a nice warm goblet of mead should make its way into your bar’s offerings.

Mead is a delicious drink with a storied history. It has been present in so many cultures around the world that it is as close as we’ll ever get to a universally accepted alcoholic beverage. Just as mead is loved by people all over the world, it is something that bars and restaurants can implement in numerous ways. If you haven’t offered it before, talk to a local meadery and see if they can find a brew that fits with your needs and those of your customers.

The beverage alcohol industry is in a constant state of flux. Categories and subcategories trend up and down as consumer...

With 2023 in full swing, we looked to kick the new year off right by taking a deep dive into the latest Provi Pulse data...

Distillation has been around for thousands of years, making its debut roughly 2000 years ago in ancient Mesopotamia. The...