Autumn is upon us, meaning that people will be shifting their flavor palates to something with a little spice and a lot of bold flavor. They’ll be looking for different liquors to be used in their cocktails to give them the textures and concentration of alcohol they need for long nights and gatherings. We’re going to take a look at the liquors that every bar should have if they want to capture the essence of autumn in a bottle (or indeed a glass).

Before we get into what liquors and spirits you’ll want to stock behind the bar, it’s important to understand the flavors that people want the most during the fall. During this time of year, people are less likely to want the citrus and berries as they do in the summer. While a beer and lemonade hybrid might be the go-to on a hot day, the colder weather and rich foods of the fall makes people yearn for a mild sweetness, bold spices, and tartness instead of outright, overpowering sweetness.

Not only are the costs for liquor a lot higher, but they also require preparation on the part of your bartender to use them properly. With that being said, we’re going to review some liquors that can help you match your customers’ desires. 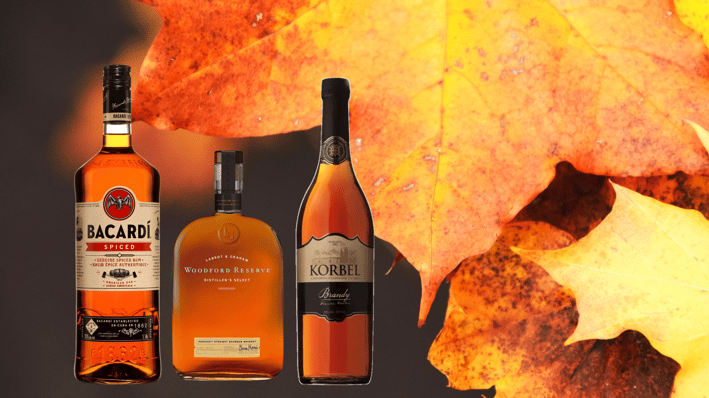 The Liquors That Provide the Best Flavors and Textures

The best spirits for the fall are not necessarily going to share one flavor or texture. Instead, they’re going to have various tastes and mouthfeels, and they’re going to come from many “families” of alcohol.

The first spirit that you should always keep stocked at your bar is rum. Now, that is going to sound like the most obvious thing in the world. Yet, the reasons are numerous. For one thing, rum comes in many forms such as spiced, white, and black rum. While spiced rum is going to be especially important during the fall season, the fact remains that it’s a fantastic base alcohol to mix with others to produce tasty fall cocktails.

Bourbon is a drink for people looking for a mature flavor profile that includes many of the tastes people desire when the chilly winds start blowing. Oak, vanilla, and caramel- this alcohol can be served alone or as part of a larger mix to provide a potent beverage. We suggest highlighting some top-shelf sipping bourbons as well as some more mixing-friendly options on your menu this fall.

Brandy or cognac are two alcohols that work well in the fall. While you can find people that prefer to drink them straight, it’s a type of alcohol with many available flavors that mix well with others. Better still, you can buy top-shelf and middle-shelf liquor and still have many options since there are so many brandy and cognac makers.

Stock your shelves with these liquors and you should have many liquors to serve straight to your customers as well as good bases for seasonal drinks.

What Mixes Work the Best?

Having the liquor at your bar is just the first step of an autumn-oriented menu. You have to know about some of the ways to serve these drinks to get people to come back to your restaurant and bar. One thing is certain, though; when you serve up some of these drinks, you’re going to get customers that come to your establishment just because you can serve up the tastes of fall.

As we already said, rum is versatile. It can be used alone, and it can be used in mixed with others. We recommend Sailor Jerry Spiced Rum. Here are some of the ways that you should serve it:

Gin is another great item to mix for cocktails even though it can be served alone. Our recommendation? Hendrick's Gin.

Bourbon is a drink that can stand on its own, like rum and whiskey. Yet, its unique flavors also work well in mixes.

Although some people prefer drinking it straight, it has a lot more potential as a fall flavor when mixed.

While whiskey and bourbon may be used interchangeably by some, the flavors are distinct. You can drink this on the rocks or as part of a great fall mix. Our recommendation? Jack Daniel's Tennessee Honey Whiskey. With hints of honey coupled by a naturally smooth finish, this liquor makes for a tasty libation, whether alone or paired with a mixer.

While many of these are famous concoctions, there are many others out there that can be made using these ingredients along with other common mixers. If you trust your bar staff, you can even let them make some of their own signature drinks to drum up some business at the establishment.

The beverage alcohol industry is in a constant state of flux. Categories and subcategories trend up and down as consumer...

With 2023 in full swing, we looked to kick the new year off right by taking a deep dive into the latest Provi Pulse data...

Distillation has been around for thousands of years, making its debut roughly 2000 years ago in ancient Mesopotamia. The...