Which country has the world’s greatest beer brands? There’s the strong contender Belgium, with brands like Duvel, Leffe and Trappist monk beers. Then there’s the Netherlands, bolstered by brands like Heineken, Amstel and Grolsch. And we can’t forget the UK with staples like Newcastle, Fuller’s and Guinness. But what about American beer brands?

Don’t shrug off the USA when it comes to great beer heritage. America has come a long way from the prohibition era to become one of the largest beer producers in the world, including a deep and diverse culture of craft beers. Of course everyone is familiar with Budweiser and Coors, but there’s plenty more liquid gold to discover. Here are 7 of the top American beer brands to watch.

Born in 1990 in Breckenridge, CO, this craft brewery quickly grew in popularity and in size, shifting to larger homes a number of times throughout the years. In 2016, they hit the bigtime and became a member of The High End, a group of breweries owned by Anheuser-Busch. They brew up favorites like their Vanilla Porter, Avalanche Amber Ale, Agave Wheat, 471 Double IPA and Breck IPA, including many seasonal offerings.

After founder Brian Dunn had previously spent time homebrewing and coming up with a business plan to get his brewery off the ground, Great Divide became a reality in 1994 in Denver, CO. Staples like their Denver Pale Ale, Hercules Double IPA, Wild Raspberry Ale and Yeti Imperial Stout have helped earn them 18 Great American Beer Festival medals, 5 World Beer Cup awards and numerous mentions and rankings in BeerAdvocate and RateBeer.com. It's safe to say the opinion on Great Divide is anything but divided. 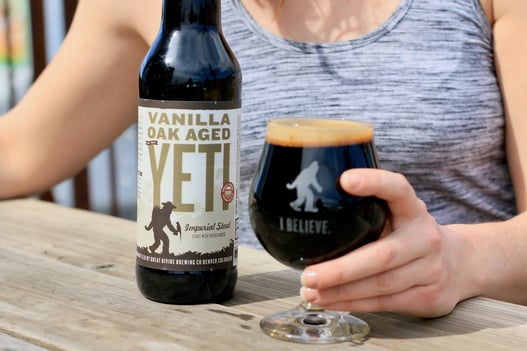 Started in 2006 by three fellas in Bend, OR, 10 Barrel Brewing Co claims that beer should be best enjoyed outdoors. Awards are fine and dandy, but their philosophy is that if the beer tastes good and you're having fun while drinking it, then all is right in the world. Try to get on board with flagship options like their Apocalypse IPA, Nature Calls IPA, Crush Guava Sour or Pub Lager.


Starting with a 20-gallon system in 2010 and upgrading to a 100-gallon system the very next year, Melvin Brewing is now headquartered in Alpine, WY with a 30-barrel system “with big shiny tanks.” They've also got a full lab to check their beer consistency. That's why their brews like 2x4 Double IPA, Killer Bee Blonde Ale and Heyzeus Mexican Lager stay so consistently great.


Getting his start as a brewer's apprentice in a small German brewery, Urban Chestnut's brewmaster Florian Kuplent now creates with a unique brewing philosophy in St. Louis, MO. The “Divergency" is a new world meets old world approach to creating artisanal, modern American beers while paying homage to the European styles that came before. You can find this blend evident in their brews like Zwickel Bavarian Lager, Urban Underdog American Lager, Fantasyland West Coast IPA and Dorfbier Munich Dunkel.


A mainstay of eastern brewing since the mid-nineties, Sam Calagione’s Dogfish Head Brewing got its unofficial start when Sam would brew beer in his NYC apartment with actor roommates Ken Marino and Joe Lo Truglio. Headquartered in Milton, DE, Dogfish Head eventually became one of America’s largest and most well-known breweries—so why are they a brand to watch? Since merging with Boston Beer Co in 2019, they can now reach an even larger audience with brews like 60 and 90-minute IPAs, Indian Brown Ale, Namaste Witbier and the original Midas Touch spiced beer.

Founded in 2012 in Asheville, NC, and brought to life by two brew-loving families, Wicked Weed built its reputation around crafting unique draft beers. Today they span four locations with three taprooms, a restaurant and show no sign of slowing down. They offer year-round favorites like their Astronomical IPA, Black Angel Sour, Fresh Pressed Wheat Ale and Day Light American Ale.

The Atrium is Building a Disneyland for Content Creators

Guest Bartending: How and Why You Should Invite One to Your Bar

Is brandy a more potent and sophisticated wine? We'll let you be the judge of that, but there's no denying brandy's clas...

The Nonalcoholic Future of the Beverage Industry: A Chat with Spiritless CEO Lauren Chitwood

The trend of low- and no-ABV is catching fire across the beverage industry—from dive bars to home bars and everything in...

Why You Should Keep Up with (and Carry) New Booze Brands

To say the Food and Bev world moves quickly would be a huge understatement. Every month there’s a hot new thing in the i...