It doesn’t matter if you’ve spent more time ordering drinks or making them, you’ve probably heard some strange bar phrases from time to time. In fact, you’ve probably used them! It’s not just bartenders using bar lingo, but everyone from patrons to servers can benefit from a little liquid vocabulary boost.

Starting a new bartender gig? Looking to brush up on your cocktail slang? Whatever the reason you want to expand your liquor lingo or bar vocabulary, we’ve got a long list of some of the most commonly used bar phrases and idioms. Pull up a stool and see if you recognize some of these.

(#) deep: If your bar is 3-deep it means you’ve got three rows of people waiting.

‍86ed: When a liquor (or ingredient) runs out or needs to be cut, it gets “86ed.” It can also be used when referring to a less-than-ideal patron who needs to get bounced from the bar.

‍Autograt: A gratuity or tip automatically added to a group’s check because of party size.

A “back”: A drink ordered alongside your liquor, usually something small and tame. “Whiskey water back” is common. See also “chaser.”

‍Bartender's handshake: A way to honor those among the craft, it’s a shot of booze on the house from one bartender to another.

‍Behind the stick: It generally means working behind the main bar and appears to come from the thin taps used for pouring draft beer from kegs. 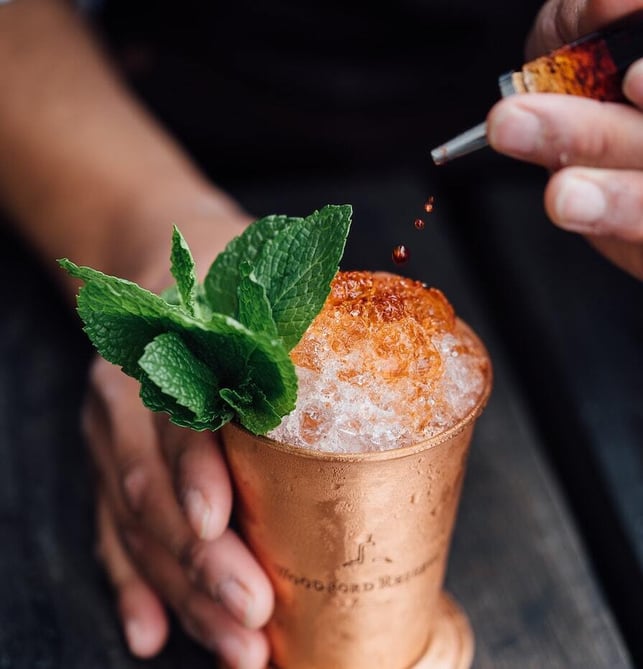 ‍Blend: The more vigorous and electric version of “shake” or “stir,” using a blender and typically involving multiple ingredients and ice.

‍Burn the ice: Melting the ice in the kitchen’s ice machine at the end of the evening, or when a glass is broken behind the bar to avoid accidental shards getting into the ice.

‍Call drink: When someone orders a drink by specific brand of liquor and mixer, for example a “Captain and 7up.”

‍Chaser: Usually a liquid, like pop or juice, to drink right after a shot or stiff drink.

‍Clopen: A term for anyone who works in a bar who has to close one evening and open the very next morning.

‍Cocktail: Do we really need to explain this one? Fair enough! It’s a name given to any alcoholic mixed drink with spirits and sweeteners. Here’s a curated list of some of the world’s bestselling cocktails.

‍Comp: To “comp” something is to give it to the customer for free. Maybe it was an item on special, maybe it was a miscommunication, but the outcome is the same: an item is removed from a patron’s bill.

‍”Corner!”: Bar staff get used to shouting this pretty often when turning around a blind corner to avoid collisions, spilled drinks and dropped food plates.

Dirty: A martini is dirty when olive brine or juice is added to the cocktail. See also “dry.”

‍Double: Making a cocktail (or serving a neat pour) with double the amount of alcohol. Also can refer to “working a double,” meaning bar staff that have to work both the daytime and nighttime shifts.

Dry: A martini is dry when there is a reduced amount of vermouth. See also “dirty.”

‍Finger: If you want to order whiskey like a wild west gunslinger, ask for three fingers next time you walk into your neighborhood bar. A couple centuries ago, bartenders would use the width of their fingers to measure out shots.

‍Flame: This one’s simple: lighting a drink on fire. Some high-proof liquors or cocktails get an added taste from adding flame, but sometimes it’s also just for added flair.

‍Float: A bit of taste and a bit of aesthetics combined. A float is when liquor or mixers are slowly poured over a cocktail to create a layer of visuals.

‍Free pour: When a bartender pours liquor right into the cocktail without measuring. This is a hot-button issue we’ve discussed on the blog before.

‍Frosting: Rinsing a glass with water and then immediately freezing it to chill for cocktails.

‍Garnish: Like cherries to sundaes, the garnish gives a finished cocktail a little something extra after it’s been made, usually for looks but sometimes for a touch of flavor. Orange, lemon and lime slices are most common, but there is a wide range. See also “twist.”

‍High top: If you want to be served directly by the bartender (or just want to watch them work) then you should sit at the high top, meaning the stools nearest the bar.

‍In the weeds: A common phrase for bar staff that’s so busy they can’t catch up.

‍Last call: Sometimes at a routine time, sometimes just shouted by the bartender, but it always signifies to patrons that they need to get their final orders in because the bar and/or service is closing.

‍‍‍”Mise en Place”: A French flair to this list, it translates to “setting in place.” Bartenders like to know where everything is so they can work quicker and so patrons can be served quicker and then everyone is happy.

Mist: Instead of ordering on the rocks, you could order “on mist,” meaning ice chips. This gives the drink a quick chill and dilution.

‍Mixer: Refers to any of the non-alcoholic liquids that go alongside alcohol in cocktails.

‍Mixology: You don’t have to be a chemist to learn the art of mixology: crafting and making cocktails.

‍Muddle: Mixing ingredients together with a muddler, usually crushing them in a larger mixing container before being transferred to the cocktail glass.

‍Neat: Serving a liquor straight from the bottle with no mixer, ice or water added.

‍On the fly: A drink order that's needed right away, typically because the original was wrong or spilled.

‍On the rocks: A cocktail is served on the rocks when it’s poured over ice.

‍Point: The busiest section of a bar, generally the area closest to the front entrance.

Rail: The more affordable bottles that sit lower on the shelf, typically used more often and in a variety of cheaper cocktails. See also “well drinks.”

‍Rim a glass: Some cocktails come with spices like celery salt or sugar around the rim, adding flavor. Done by wetting a glass in a rimmer and then dipping it into salt, sugar, etc.

‍Shaken: If you plan on getting your martini (or any cocktail) served up James Bond style, it means having the cocktail ingredients mixed by shaking them in a shaker. This process usually gets the drink colder quicker, but dilutes it less. See also “stirred.”

‍Shooter: If you’ve had a Jello shot then you’ve had a shooter. It’s usually a smaller, manageable mixed drink that’s served like a shot.

‍Shot: Anything served to be drunk in one go, typically with 1.5 ounces of straight liquor.

‍Speed rail: This makes up the bottles that are usually positioned closest to the bartender, for commonly ordered cocktails or special drinks during happy hour.

‍Stirred: If you’re getting a cocktail stirred, it means to stir the ingredients with large or small ice cubes. It’ll take longer to cool the drink but also dilute it less. See also “shaken.”

‍Straight: Usually means the same thing as “neat,” nowadays. Just don’t say “straight up” since that might confuse things a little! See also “up."

‍Strain: Pouring a cocktail out of a shaker so that any leftover ingredients that didn’t dissolve stay in the shaker and don’t get into the glass.

‍Top shelf: The highest quality and most expensive bottles of liquor, hence their status on the “top shelf” of the bar.

‍Turned: When a patron leaves and another sits down, it means that table or stool has been “turned.”

‍Twist: The orange slice in your old fashioned is a “twist” and these are used to add flavor or decoration to cocktails. See also “garnish.”

Up: Perhaps commonly confused with “straight up,” this is actually slightly different than straight/neat. It’s when you have your drink of choice shaken with ice and then strained into a glass and served without the actual cubes.

‍Well drinks: These are the lowest-cost bottles the bar uses for commonly-ordered drinks. See also “rail.”

Bar Profit & Loss: Tips for Staying in the Black