It’s difficult to imagine a more divisive beer than the pumpkin ale.

For some, it means fall is in the air. It means that the leaves are changing, flannels are coming out, and Dogfish Head’s Punkin Ale is finally within reach. For others, it falls into a similarly disliked and exhausted category as pumpkin spice lattes and candy corn. Whatever side of the spectrum you fall on, we at Provi think it’s probably best to accept pumpkin ales and their place in the Autumnal beverage canon. What many people don’t realize though, is that pumpkin beer is far from a modern invention. In fact, this oft-hated brew has its roots in early, colonial America. Certainly, the style has seen a huge resurgence in popularity over recent years, but American mentions of pumpkin ale can be found as early as 1771. Yep -- believe it or not, pumpkin ales predate the founding of America.

But we’ll get to that in a second.

First, though, a quick crash-course in pumpkin beer. While some might think that a pumpkin ale is simply a standard ale that’s been brewed with pumpkin pie spice, that’s traditionally not the case. In a “real” pumpkin ale, malts and grain are largely replaced with the flesh of pumpkins. This pumpkin addition is what creates fermentable sugars (and thus alcohol) within the brew. Some companies (and we won’t name names) do simply flavor/spice their standard offerings, but that isn’t traditionally the ‘correct’ way of going about this classic. And although today many love the ‘pumpkin pie in a bottle’ style, spice-heavy version, the reason for the pumpkin ale’s existence has nothing to do with flavor.

In early America, colonists (like any reasonable humans) had a taste for all things boozy. While beer would have been included in this, the necessary grains and crops to actually brew beer were decidedly unavailable. Never deterred and ever-resourceful, though, the colonists turned to other options. Amongst these other options, corn, apples, and indeed pumpkins were all popular. Early brewers found that the pumpkin flesh contained enough sugar to effectively replace traditional malts. On top of that, pumpkins were widely available and naturally growing in the “New World.”

It’s important to note, though, that these early pumpkin ales had little in common with today’s spice-heavy brews. They were generally low on flavor and seen as a “decent-at-best” alternative to traditional brews. Those of you have eaten pumpkin-sans-spice know firsthand: pumpkin doesn’t have much flavor. In fact -- pumpkin ale haters rejoice -- even colonists didn’t really like pumpkin ales.

As Cindy Ott, author of Pumpkin: The Curious History of an American Icon says:

“Pumpkin ale was not something that was treasured in any way, shape or form. In the early Colonial era, pumpkin was cheap and prolific and grew like a weed. When there was no wheat for bread or sugar for cake or barley for beer, they could substitute the prolific pumpkin.”

As Ott says, the early American uses of pumpkin extended far beyond beer. Pumpkin was such a popular and accessible source of sustenance (boozy or otherwise), that it became the subject of a 17th-century folk-song:

“Instead of pottage and puddings and custards and pies, Our pumpkins and parsnips are common supplies//We have pumpkin at morning and pumpkin at noon//If it was not for pumpkins we should be undone ... Hey down, down, hey down derry down.... If barley be wanting to make into malt We must be contented and think it no fault For we can make liquor, to sweeten our lips, Of pumpkins and parsnips and walnut-tree chips.”

So, how did we get here from there? How did pumpkin beer come to a place of desirability, in spite of its early status as a last-resort? To find the solution here, we’ve got to fast forward to 1985. Before craft beer had any amount of shelf space, and before pumpkin spice lattes inundated our collective autumnal existence.

The first spice-heavy, modern pumpkin beer came from California-based Buffalo Bill's Brewery, and is still available today. Owner Bill Owens was inspired by accounts of George Washington’s homemade pumpkin-based beer. In an impressive stroke of DIY-spirit, Owens grew his own pumpkin, roasted it, and added that to the mash of his brew. Although it brewed well and created reasonable gravity, Owens found the final product to be lacking any pumpkin flavor. In his own words:

“There was no pumpkin flavor whatsoever because you’re taking a starch, the gourd, converting it to sugar, fermenting the sugar, adding hops and then fermenting, so any flavor from the pumpkin is stripped away.” 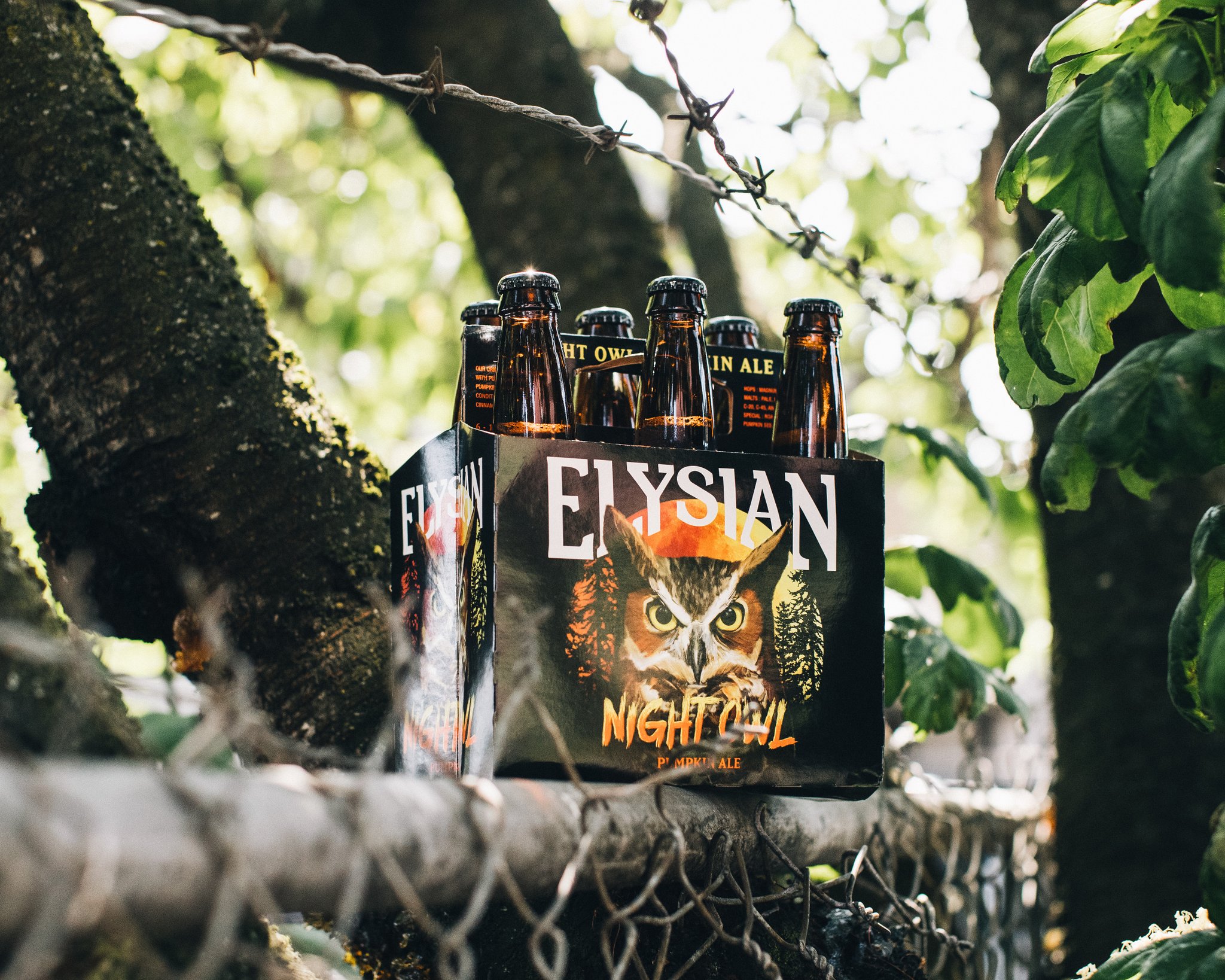 His solution was remarkably simple: Owens went to his local supermarket, bought some pumpkin pie spice, and tossed it into his brew during fermentation. And just like that -- love it or hate it -- the modern pumpkin ale was born.

Today, there’s no shortage of pumpkin ales out and about during this time of year. But for us, Elysian Brewing Company is a group that stands above the rest. In addition to getting their standard pumpkin ale just right (Night Owl Pumpkin Ale), Elysian offers a few other fall-friendly, pumpkin-y brews.

Bringing some Stumptown coffee flavors proves a good idea in Elysian’s Punkuccino Coffee Pumpkin Ale. Coffee, pumpkin, cinnamon, and nutmeg come together in a caffeinated, biscuity brew that has us asking for seconds (and thirds…and maybe fourths…)

In Elysian’s Dark Knife, cinnamon flavors sing in harmony with pleasantly spicy ginger notes. This Schwarzbier also features a smattering of Saaz hops for a bitter finish that is pleasantly sharp. It’s a unique, spooky take on the pumpkin classic.

The company’s Great Pumpkin Imperial Ale is a less radical departure from the pumpkin-y norm. But, don’t be fooled -- this imperial ale is unlike any other pumpkin beer you might find. Bready and malty, this one brings to mind a nice loaf of pumpkin bread.

But that’s just a small selection of pumpkin-y options this fall. If you’re looking for a craft-made pumpkin ale, the possibilities are pretty close to endless. Thankfully, Provi is here to help sort it all out for you.

Here's Why You're Seeing Bananas Everywhere

The cocktail scene these days is bananas (que the Gwen Stefani references, please). But, really -- banana has become the...

It’s that time of year again -- Dry January. Although decidedly difficult to observe for those of you in the industry, D...

When Food Trucks first burst onto the culinary scene, you’d have thought they were gonna bankrupt the restaurant industr...