There are times when it feels like the IPA single-handedly carries the craft beer industry. Over the past twenty years, the hoppy style of beer has arrived and then some, becoming the genre-of-choice for even the trendiest, most discerning beer drinkers. Well, in a case of ‘what’s old is new’, it turns out the IPA is a centuries-old style with roots going back to the 1700s.

The etymology of the term “India Pale Ale” is oft-repeated as a fun fact. Chances are, you’ve heard some variety of: “ The IPA was invented by the British to stop beer from spoiling during sea-voyages to India”.

In reality, that’s far from fact.

In the 18th century, beers were being shipped worldwide. The journey to India in particular was four months long, and beers (of a few styles) had successfully taken much longer and much more arduous journeys around the globe. For example, the 1769  journal of a man named Joseph Banks speaks of enjoying a year-old porter:

“It was this day a twelvemonth since we left England, in consequence of which a peice [sic] of cheshire cheese was taken from a locker where it had been reserved for this occasion and a cask of Porter tapped which proved excellently good, so that we lived like English men and drank the hea[l]ths of our freinds [sic] in England.”

In addition, numerous beer recipes at the time noted that the end result would be drinkable for well over a year. So now that the myth- busting is out of the way, we can get into the facts.

By the late 18th century, British soldiers in India and the Caribbean demanded beer (like any reasonable person). The East India Company was happy to oblige, and found a brewer named George Hodgson. They tasked Hodgson with providing beer for the men. He provided a couple of styles of beer -- one, a darker Porter, and second a paler style- then called October beer. Unsurprisingly, soldiers grew a taste for the slightly lighter (and yes, more hopped) October style of beer. The beer was referred to as a Pale Ale, to distinguish it from its darker cousin. In 1822, the Calcutta Gazette praised this pale beer from Hodgson:

“Hodgson’s warranted prime picked pale ale of the genuine October brewing, warranted fully equal, if not superior, to any ever before received in the settlement.”

Once it gained popularity in the hot, tropical climates with British soldiers, other brewers began to compete for the business. These new brewers would label their own beers as “India Pale Ales”, in a piece of clever marketing strategy. One in particular, Samuel Allsop, crafted a pale ale that unintentionally carried a more dry, bitter flavor. Unbeknownst to him at the time, the water he used from outside of London carried minerals that contributed to a brighter, crisper ale. His beer would eventually replace Hodgson’s in the British Colonies, and be crowned as the quintessential India Pale Ale.

In the coming years, the changing tides of consumer taste would see IPAs falling in and out of vogue, before finding their footing stateside. 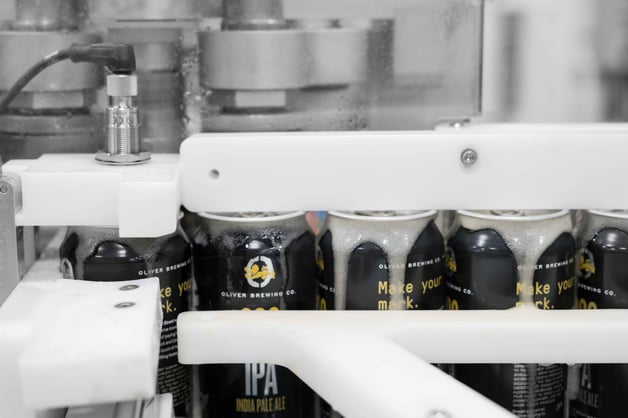 The IPA was slowly finding a home in America around the late 19th century, when England began shipping beer across the Atlantic. Like most good boozy histories, prohibition takes this one to a screeching halt. Production of IPAs during prohibition all-but-disappeared in America, and it would remain that way until around 1975.

It was that year when San Francisco-based Anchor Brewery released the first-ever American IPA, although the company did not use the term at the time. It wasn’t until eight years later, when Yakima Brewing and Malting Co. were bold enough to bring the historic term back into America’s beer lexicon.

Over the next twenty years, the IPA took off in a sort of ‘more is more’ way. Anchor Brewing and Yakima Brewing would soon become mild, and even boring, in comparison to their competitors. Double, triple, and even quadruple IPAs began to make themselves known. Dogfish Head presented a 120 minute IPA. The IBU scale debuted, giving drinkers some way to quantify their tastes and push themselves further. There seemed to be no end in sight to this bitter-is-better mentality, until recently.

Perhaps as a direct reaction to this never ending push towards bitterness, IPAs in recent years have undergone a bit of a makeover. The IPA is shying away from ultra-bitter, instead opting for smoother corners with a more drinkable approach. Fruit juice and other bold flavors have started to invade the IPA, pushing bitterness perhaps to the back burner. The bitter, hardly-palatable flavor is often seen playing a supporting role now. Instead, brewers are leaning into heavy aromatics and bold flavors. Beers like Bell's Official Hazy IPA and Founder's All Day IPA have seen success with this refreshing approach. Whatever shape the IPA seems to be taking these days, there’s no sign of it being dethroned anytime soon.

Beerboard, a restaurant trend analysis company, reported a 34% spike of IPA pours in restaurant settings, as recently as 2017. Even more current, Food and Wine reported that IPAs have continued to grow in 2018. Over twenty years since the IPA began to catch on, the style is still leading the beer market in year-to-date growth. To corroborate these numbers, The Drinks Business reported a 10.1% growth for the IPA in 2018, with total sales creeping quickly towards the billion dollar mark. It’s hard to look at figures like this and dismiss the IPA as simply another trend.

The IPA has come a long, long way since its maiden voyages from England. And in the past twenty years, it’s also come a long way since the days of pure bitter-bombs, void of any other flavors or complexity. In a time where session-style beers are all the rage, the IPA is fitting right in. Between the light sensibilities that the IPA can carry, and the potential for bright, bold flavors, it just makes sense.

Our take? Let’s keep it going. Almost every month, we’re seeing great new IPAs. If we can give our guests and patrons something new and fresh to enjoy, they’re sure to come back for more.

Last-Minute Valentine's Day Ideas For your Bar or Restaurant

You might as well start ordering champagne and strawberries now.