Just like whiskey gets better with age, so too do the flavors and varieties with each passing year. But how long can a liquor thrive? In the case of America's spirit, bourbon will never go out of style. The bourbon category sold on Provi throughout 2021 had a 5.2x year-over-year (YoY) growth. So what brands came out on top? Let's check out the top 5 that rounded out the category. 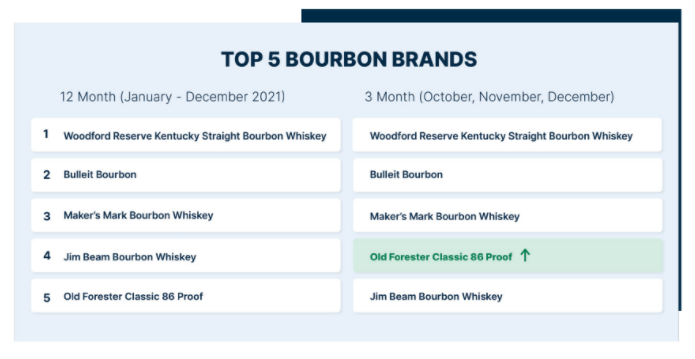 Crafted and first distilled in 1870, Old Forester claims to be the only bourbon still brewed by the founding family before, during and after prohibition. Sharp and sweet, if you want a "classic" bourbon, you can't go wrong with this bottle.

Is there anything more synonymous with bourbon than the name Jim Beam? As the number one selling bourbon in the world, you'd be hard pressed to find a better suiting name. From corn farmer to master distiller, Jim Beam sold the first barrel in 1795 and the rest is history.

If you know bourbon, you know the red wax top that adorns every bottle of Maker's Mark. With a delicate seal just begging to be broken, each bottle is made with care and by hand to produce bourbon that can be consumed in 6 to 7 years. As they say at the distillery, "if we could make it quicker, we wouldn't." How's that for attention to detail?

The young buck of our top 5, Bulleit was established in 1987 but quickly became one of the fastest-selling bourbon brands in the country. Adopted by many bartenders as the bourbon of choice, this spicy and bold variety sits well in a cocktail, on its own or with ice.

Woodford Reserve is Provi's top bourbon seller across 2021! First distilled in 1812, Woodford Reserve comes from a distillery that now claims distinction as a National Historic Landmark. This premium small batch of bourbon finds its fans in bourbon purists and dabblers alike, and won't break the bank, either.

Best Blenders for Bars and Restaurants for Making Drinks

Agave Spirits Are On The Rise

To say agave spirits are on the rise is actually a bit of an understatement. Over the past several years, the category h...

Before it’s in our glass, wine starts on the vine. And like other beloved agricultural products like coffee and chocolat...