Q1 revealed surprisingly familiar purchasing trends harkening back to that pre-pandemic era the entire country is so eager for. Provi— the leading ecommerce marketplace for the bev alc industry—analyzed hundreds of thousands of transactions to understand how the quarter impacted beverage trends and what that could mean for spring and summer this year.

To limit the impact of various reopening patterns we restricted our analysis to only retailers placing consistent orders across all of Q1, and then zeroed in on how their March purchases differed from February. Also worth noting—for this report, we focused on our most mature markets—Colorado, Georgia, and Illinois.

And if there’s anything you should take away from our Q1 Data Report, it’s this:

So, without further adieu, let’s dive head-first into the data!

Basket Size & Dollar Amount Are Up

As temperatures begin to rise and restrictions lessen, bars and restaurants (retailers) across the country are gearing up to serve patrons a wider variety of drinks. In March retailers began to expand their breadth of products with a 10% average increase in new products purchased— predominantly beer and spirits.

Hard Seltzer is Still On the Rise

Between Beer, Wine and Spirits, Beer grew the highest from February to March at 48%. But what types of beers were buyers trying to get their hands on? Ready-to-drink cocktails and hard seltzers both saw an increase in sales and were up 105% and 84% respectively. With the current breadth and variety of offerings available in the hard seltzer and ready-to-drink (RTD) space, we can only assume these categories will continue to grow. Its also worth noting that we saw an increase in Irish stout sales–up 118% MoM–although this was likely due to the St. Patrick’s Day holiday. (More on that later). 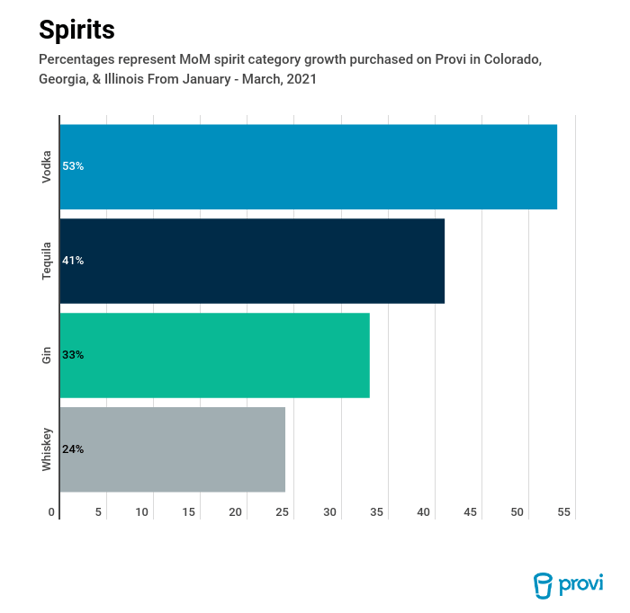 An Earlier Shift Towards Spring Spirits

While spring doesn’t technically begin until March 20th, we are starting to notice an earlier shift in purchase behavior towards spring spirits. Liquor showed the second-highest MoM growth at 44%. Beverage buyers were stocking up on categories such as vodka, tequila and gin, with whiskey showing the least amount of MoM growth. We can assume that buyers are straying away from darker, winter spirits in lieu of all things light and refreshing—and just in time for the season!

But can we assume the correlation between the growth of tequila, lagers and Mexican beers? More and more establishments are beginning to pair tequila with light-bodied lagers such as Tecate, Corona or Pacifico. It’s the ultimate beer-and-shot pairing that is best thrown back on a warm spring or summer night. We will continue to monitor this trend throughout the spring and summer seasons. Stay tuned! 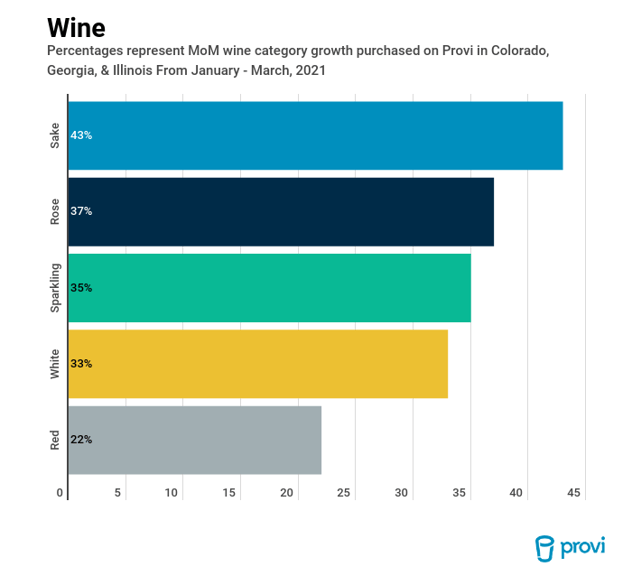 Wine is Also Shifting with the Weather

Out of beer, wine and spirits, wine showed the least amount of MoM growth at 34% from February to March. Interestingly enough, within the wine segment, sake sales were up 43%—the highest growth out of the other wine categories. With to-go cocktails and cocktail kits on the rise, could this growth be correlated to consumer take-out sales?

Similarly to spirits, we saw trends in wine shift towards lighter, more refreshing varietals. rose, white and sparkling wine showed significant MoM growth, whereas red appears to be phasing out for the season. This is all par for the course as the weather turns warmer and patios begin to open.

Collectively, products like Jameson and Guinness beer were up 80% MoM from February to March, but 51% lower than they were in 2019. Does this mean that the popularity in serving Irish-themed products around the holiday are consistent with prior years… or changing? We may not know until the pandemic is behind us. Our hot take? Beverage buyers were simply buying less product than in recent years.

We may only be three months into 2021, but already we are starting to see a dramatic shift in beverage trends. Bars, restaurants, and retailers are slowly starting to increase their average spend and add more variety to their offerings. Categories such as ready-to-drink, vodka, and rose are on the rise as temperatures begin to follow suit. We’ll be interested to see how these trends pan out over the rest of 2021!

How to Manage & Improve Online Reviews for Your Restaurant or Bar

The Bar Boom is Back: Alcohol Sales Up Across Major US Cities

Did you hear that? That’s the sound of ice tinkling in cocktail glasses. As vaccination rates slowly increase across the...

The Top 20 Ready to Drink Brands Fueling the Bar Scene

After spending over twelve months indoors, your customers are back with a vengeance. They are ready to socialize and spe...

3 Chicago Alcohol Trends to Watch in 2020

Now that 2019 is officially behind us we can look towards the trends that will shape the alcohol space in the on-premise...