Beat The Heat With A Gose Beer

A friend of mine once described gose beers as tasting like cold sweat.


Hyperbole to be sure, but the gose is definitely one of the more divisive styles of beer today. To the fan of a more traditional beer-y profile, a gose probably tastes like a spoiled, perhaps even ‘dangerous-to-drink’ beer. On the other hand, some folks find the gose to be the perfect summer refreshment. It’s light, sessionable, and pairs well with the beach. For the indoctrinated of us, summer is the perfect time of year for one of these salty brews.


With its salty and sour combination, we shouldn’t be surprised that goses aren’t always considered ‘crowd pleasers’. The gose is so strange, though, that one can’t help but wonder: why? Who decided to make a salty beer? Why was this even considered a good idea in the first place?


Well, you may be surprised to learn that the gose style beer could be over 1000 years old. 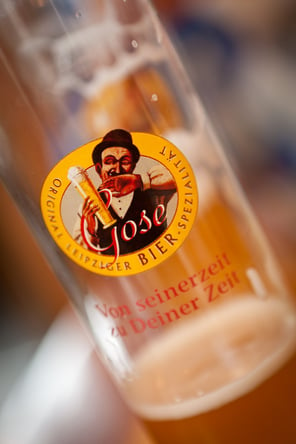 
If anyone ought to know, we’d say it’s The German Beer Institute, who makes the claim that “even Emperor Otto III, who ruled Germany between 983 and 1002, sang the Gose’s praises”. That being said, the earliest usage of the word ‘gose’ to describe a beer is from 1470 AD. While this very early history of the gose is cloudy at best, things do become more verifiable later in the timeline.


We know for certain that the beer has its roots in a place called Goslar, Germany, where the Abzucht and the Gose rivers meet. There’s no hard evidence that the beer was named for the river, but it seems likely -- its water was used in the creation of the first gose beer. The beer was a hit, but it wasn’t until 1738 that it found massive popularity in the nearby larger town of Leipzig.


In Leipzig, brewers began to imitate the style. The salinity of the gose river had originally given goses their salty flavor, so the Leipzig brewers simply added salt to their brews. The gose became so popular in Leipzig that it was exempt from the Reinheitsgebot -- a German regulation stating that beer could only be made from water, barley, yeast, and hops. Speciality taverns called gosenschanken opened in Leipzig too, serving only gose-style beers.


At the time, the gose’s had some practicality issues. The brew was so popular that taverns had to be waitlisted before stocking the beer at all. And then, even when the beer was in hand, the bars were only allotted a limited quantity. What’s more, goses offered the added inconvenience of needing to be fermented in the bar, not at the brewery. The beers were allowed to sit in specially-designed, generously-sized glass bottles without a top -- the ‘top fermenting’ style of beer meant that the yeast would collect in the narrow neck of the bottle, and form a natural cork.


Kind of gross? Yes. Effective? Sometimes. If the bottles were jostled too much, the ‘cork’ would explode and beer would spill everywhere.

A glimpse of history. The original gose bottles had a long, narrow neck. Image courtesy of Dirk Van Esbroeck.

After the era of the gosenschanken, the gose story falls into a fog once again. The beer faded out of popularity and into obscurity over the next two hundred years, for reasons not entirely clear. One often-repeated anecdote is that the top-fermented nature of the gose made it difficult (if not impossible) to transport and store. Bottom-fermented beers began to take the goses place in popularity, and the ‘old fashioned’ styles fell by the wayside. In fact, by the beginning of WWII, there was only one remaining gose tavern in Germany. By 1945, its doors were shut, and the gose seemed all-but-dead.


Fast forwarding all the way to 1986, though, and the gose starts to claw its way out of the ground. Or rather, a man named Lothar Goldhahn pulls it from the ground. Goldhahn discovered a disused gosenschenke, and decided to restore the place. Along with the tavern, Goldhahn made it his mission to resurrect the style of beer itself. Over the next couple decades, he did just that.


Eventually, with the stateside renewed interest in old-world beers, the gose made its way west. In 2012, Charleston’s Westbrook Brewing Co. introduced a distinctly un-Americanized gose. It was tangy, relatively low-booze, and came with a pop of coriander spice. As far as we can tell, that was the jumping-off point for the American gose.


Dozens (and dozens and dozens) of goses would come out as a reaction to Westbrook’s success, some more faithful than others. Many of these American goses lacked the spice and salty characteristics that actually defined the style, instead chasing the current interest of sour and hazy beers. Thankfully, we here at Provi, are happy to sort the fact from the fiction. With no further ado, we present to you our three most faithful and funky American goses available today.

If you’re interested in a subtle, gentle take on the gose...skip over this one. It’s about as salty as you could make a beer, but the addition of key lime juice creates a nice resting ground for all that saltwater flavor.

This one is a bit more refreshing than the Suburban Beverage, but it definitely doesn’t cut any corners. It checks all of the salty and spicy boxes that are expected of a legitimate gose, while also offering a backbone of blood orange juice to keep things forward-thinking.

This one is one of the most true-to-form goses we could find. With a no-frills attitude, Boulevard's gose is spiked with pleasantly full saltiness and coriander during the brewing process. Dried hibiscus flowers are steeped at the tail end, as well. This gives the beer a floral sweetness, while incidentally making for a light pink hue in the beer.